Christian leaders have expressed their dismay and outrage after a Forth Worth, Texas, officer shot and killed a black woman inside a home where she had been playing video games with her 8-year-old nephew.

In the early hours of Saturday morning, 28-year-old Atatiana Jefferson was killed by a single shot from a police officer who fired through a window into the home while responding to a call to check on those inside, police said in a statement.

The unidentified officer has been placed on administrative leave pending an investigation by the police department and the Tarrant County District Attorney’s Office, police said.

“I called because I was concerned for my neighbors,” Smith said, noting that it was “not normal” for the doors to be open for so long (since 10 p.m.) and for the lights to be on at such a late hour. “What I witnessed was three or four tactical officers come from around the corner seem like … And in less than a minute, I heard gun shots.”

According to NBC Dallas-Forth Worth, body camera footage shows the perspective of the officer outside the home, peering inside a window using a flashlight. After spotting someone standing inside near a window, he yells, “Put your hands up — show me your hands,” before shooting seconds later. At no point does he identify himself as an officer.

Jefferson’s nephew said they had left the door open while playing “Halo” in order to enjoy the fall breeze, according to S. Lee Merritt, a lawyer for Jefferson’s family, as reported by USA Today. When they heard someone outside, Jefferson went to the window to see who was there. The nephew told Merritt that they heard a man’s voice shouting something and then his aunt was shot.

Jefferson’s death comes just weeks after Amber Guyger, a police officer in nearby Dallas, was found guilty of murder for fatally shooting 26-year-old Botham Jean while he ate ice cream in his home in 2018.

Attorney Lee Merritt, who is representing Jefferson’s family, described Jefferson as a hard-working and loving woman who cared for her family.

“She was a premed graduate of Xavier University. She was very close to her family. She was the auntie that stayed up on Friday night playing video games with her 8 year old nephew,” he wrote on Facebook. “She worked in pharmaceutical equipment sales. Her mom had recently gotten very sick, so she was home taking care of the house and loving her life. There was no reason for her to be murdered. None. We must have justice.”

“I am tired of shaking my head and rubbing my head and trying to think what it would be like to be Black in America. I want to be part of a CHANGE. NOW in this generation. This injustice is outrageous. What continues to go on in this nation in regard to Black Americans is madness.”

Christian author Trillian Newbell shared a photo of Jefferson holding her 8-year-old nephew along with the caption: “This picture broke me. My heart cries out for her family. #AtatianaJefferson.”

J.D. Greear, president of the Southern Baptist Convention, re-tweeted Newbell’s photo along with the caption: “Yes, Trillia. Grieving, confused. Praying for her family.” 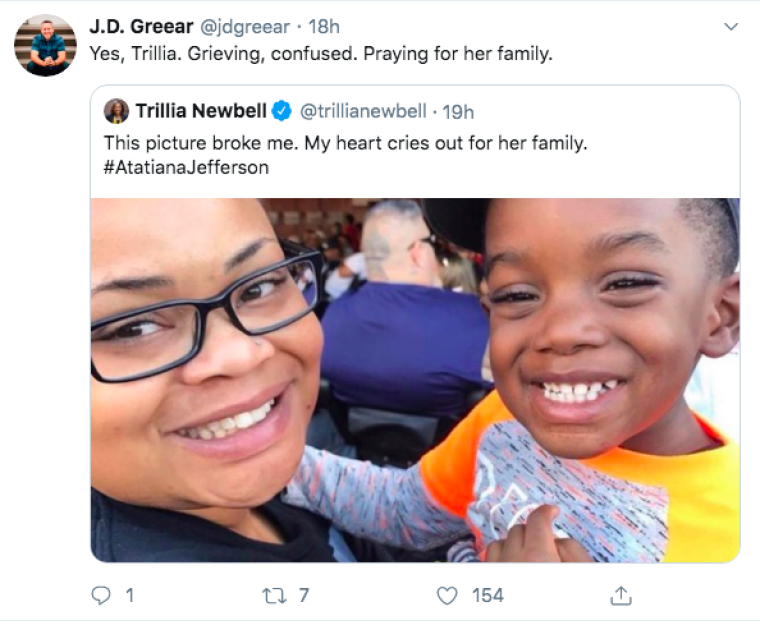 Author and evangelist Priscilla Shirer also shared the photo with the caption: “Lord have mercy. We speak her name. #AtatianaJefferson.”

Rich Villodas, pastor of New Life Fellowship in Queens, tweeted: “Affirming that #blacklivesmatter is not a partisan, political statement. It’s an image of God proclamation. The reason why affirming it is so important is because the vast majority of US history & current systems deny that reality. #AtatianaJefferson.” 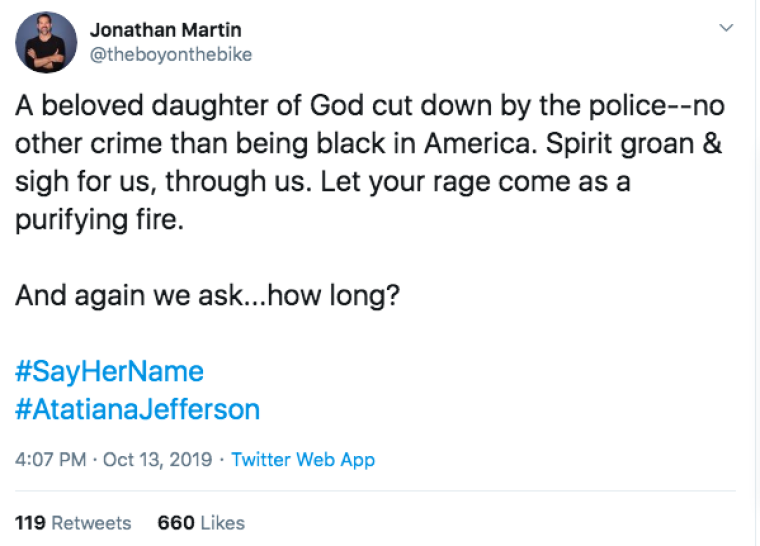 Jonathan Martin, the lead pastor of The Table, tweeted: “A beloved daughter of God cut down by the police–no other crime than being black in America. Spirit groan & sigh for us, through us. Let your rage come as a purifying fire. And again we ask…how long? #SayHerName #AtatianaJefferson.”

US Christians more likely to consider their pastor a ‘friend’: Barna study