Speaking on “The Seat” show on Net 2 TV, the MP hinted that Ibrah One has been using cars which he has not paid Customs duty on and uses his forex bureau for illegal transactions.

“The most serious thing is he has a forex bureau and uses that for money laundering. Every bank that the boy saves [with], we’re going to investigate,” Mr Agyapong charged.

“Bank of Ghana should change that policy…” he added.

“You small boy…one of my cars can buy all of your cars. He does ‘sakawa’ [advance fee fraud] complete. Look at him…,” a livid Kennedy Agyapong further alleged.

Ibrah One had also said on one of his social media handles that Kennedy Agyapong is one of the biggest money launderers in Ghana.

Ibrah One then dared Kennedy Agyapong to respond to him within 24 hours, if he claims to be perfect and is not afraid of him.

On the Net 2 TV show, Kennedy Agyapong revealed that he had been monitoring Ibrah One for some time now and is aware of his shady dealings.

Showing some of Ibrah One’s pictures on Net 2 TV, Kennedy Agyapong sent a strong warning to Ibrah One and promised that in about 48-hours the latter will be arrested.

“You get nerves boy…,” the MP charged again.

In a swift rebuttal, Ibrah One posted on his Snapchat handle that his gate is going to remain open for two consecutive days and if by the third day he has not been arrested, the MP would die.

“Ken!!! My gate is going to remain opened (sic) like this for 2 solid days. I did this just to show you how messy I am! On the 3rd day, u ppl will start to die, even that ur stupid short president will be part of (sic) the corpse! Even Billgate (sic) will look for me just to forgive him,” Ibrah One threatened in his Snapchat post. 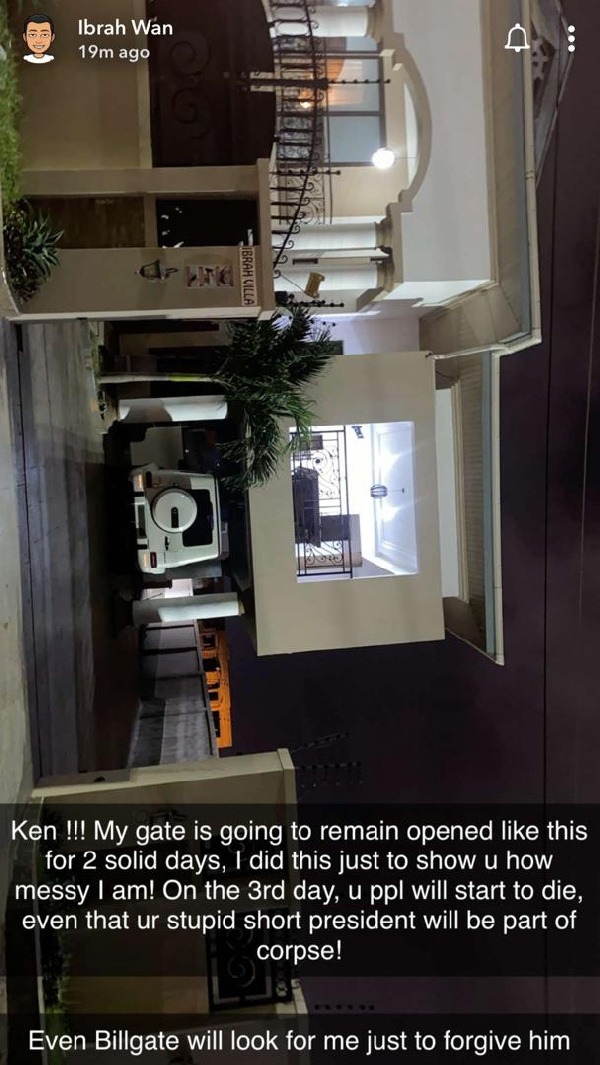 Otumfuo to NPP delegates: Choose a candidate who’ll be accepted by Ghanaians