The US Supreme Court has ruled President Donald Trump’s travel ban on six mainly Muslim countries can go into full effect, pending legal challenges. The decision is a boost for Mr Trump’s policy against travellers from Chad, Iran, Libya, Somalia, Syria and Yemen.

The ruling covers the third version of the directive that the president has issued since taking office. Seven of the nine justices lifted injunctions on Monday imposed by lower courts against the policy.

Only liberal Justices Ruth Bader Ginsburg and Sonia Sotomayor would have allowed the president’s order to remain blocked.

What happens next?
Federal appeals courts in San Francisco, California, and Richmond, Virginia, will hear arguments this week on whether the latest iteration of the policy is lawful.
The Supreme Court noted it expects those courts to reach decisions “with appropriate dispatch”.
The case will eventually end up back in the Supreme Court.

Media captionMuslim students on Trump ban: ‘I don’t belong here’
Monday’s decision suggests America’s top judicial body may ultimately rule in favour of the administration, say legal analysts.
David Levine, a University of California Hastings law school professor, told the Associated Press news agency: “It suggests that from their understanding, the government is more likely to prevail on the merits than we might have thought.”

What’s the reaction?
White House spokesman Hogan Gidley said the White House was “not surprised” by the Supreme Court’s decision.
US Attorney General Jeff Sessions called the ruling “a substantial victory for the safety and security of the American people”.

But the American Civil Liberties Union (ACLU) said the president’s retweeting of British far-right videos last week showed his discrimination against Islam.
“President Trump’s anti-Muslim prejudice is no secret – he has repeatedly confirmed it, including just last week on Twitter,” ACLU lawyer Omar Jadwat said.
“It’s unfortunate that the full ban can move forward for now, but this order does not address the merits of our claims.”

How have Trump travel bans fared?
The president’s directives have each been frustrated by the courts to some degree:
In January, he signed an order banning people from seven Muslim-majority countries for 90 days and suspending all refugee entry. The measure, which also banned Syrian refugees indefinitely, prompted protests and multiple legal challenges

A revised version in March removed Iraq from the list and lifted the indefinite ban on Syrian refugees. By June, the Supreme Court allowed most of it to go into effect, including a 120-day ban on all refugees entering the US. But it granted a wide exemption for those with a “bona fide” connection to the US

What have lower courts said?
The US president insisted his ban was necessary for national security and pointed to terrorist attacks in Paris, London, Brussels and Berlin as evidence.
But in striking it down, federal judges have cited Mr Trump’s campaign description of his policy as a “Muslim ban” and his call for “a total and complete shutdown of Muslims entering the United States”.

Lower courts across the US have said the president’s policy violated the first amendment of the US constitution covering freedom of religion.
In October, a Maryland federal judge said: “The ‘initial’ announcement of the Muslim ban, offered repeatedly and explicitly through President Trump’s own statements, forcefully and persuasively expressed his purpose in unequivocal terms.”

A federal judge in Hawaii said the policy “plainly discriminates based on nationality” in violation of “the founding principles of this nation.”

U2 Debuts Bible-Themed Single With Kendrick Lamar on SNL 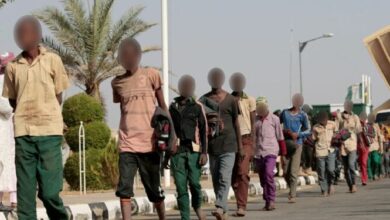 Tanzania to review mobile tax after out cry