The US House of Representatives has voted to symbolically condemn President Donald Trump after a series of attacks aimed at four congresswomen.

The resolution denounced Mr Trump’s “racist comments that have legitimised fear and hatred of New Americans and people of colour”.

It passed by 240 votes to 187 in the Democratic-controlled chamber.

Mr Trump has defended his calls for the four women to leave the US, saying: “I don’t have a Racist bone in my body!”

All Democratic members were joined by four Republicans and the chamber’s sole independent, former Republican lawmaker Justin Amash, to approve the resolution.

In a series of tweets on Sunday, the president said Representatives Alexandria Ocasio-Cortez, Ilhan Omar, Ayanna Pressley and Rashida Tlaib “originally came from countries whose governments are a complete and total catastrophe” and should “go back”.

Mr Trump did not explicitly name the women – all four of whom are US citizens – in his initial Twitter tirade, but the context made a clear link to the four Democratic congresswomen, who are known as The Squad.

The congresswomen dismissed the comments as a distraction on Monday, and urged people instead to focus on policies rather than the president’s words. 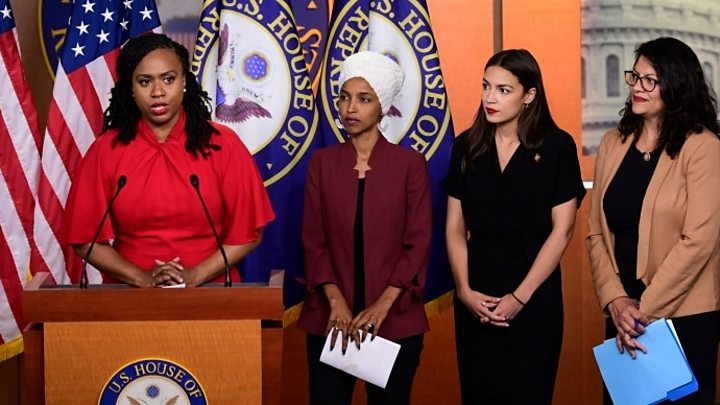 Photo (above): Ayanna Pressley, Ilhan Omar, Alexandria Ocasio-Cortez and Rashida Tlaib responded to the attacks at a press conference on Monday

A rancorous debate preceded the vote. Democrat John Lewis said that “at the highest level of government, there’s no room for racism”, while Republican Dan Meuser called the allegations a “ridiculous slander”.

Immediately after the vote, Democratic Representative Al Green filed articles of impeachment against President Trump. The Democratic leadership has refused to pursue impeachment, despite increasing calls from members of their party to do so.

Reading from his resolution, the Texas congressman said Mr Trump had “brought the high office of the President of the United States in contempt, ridicule, disgrace and disrepute”.

What did the resolution say?
The resolution “condemning Resident Trump’s racist comments directed at Members of Congress” quoted US founding fathers and former presidents.

It also noted that patriotism is not defined by race or ethnicity “but by devotion to the Constitutional ideals of equality, liberty, inclusion and democracy”. 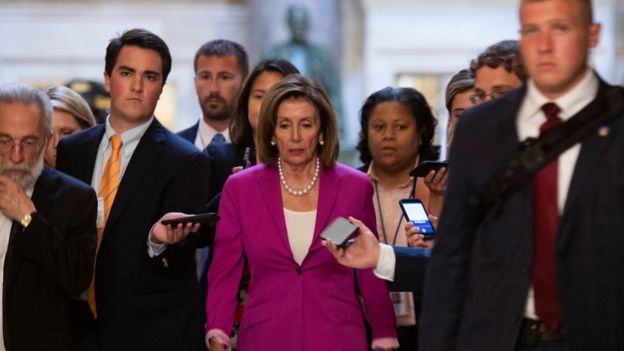 “These comments from the White House are disgraceful and disgusting and these comments are racist,” House Speaker Nancy Pelosi said in the debate. She has at times clashed with the four congresswomen but was vocal in their defence on the floor.

Republicans however said her comments broke rules, with House Republican leader Kevin McCarthy saying they went against the “order and decency” of the chamber.

What is the row about?
On Friday, Ms Ocasio-Cortez, Ms Tlaib and Ms Pressley testified to a House committee about conditions in a migrant detention centre they had visited.

Democrats have widely criticised the Trump administration’s approach to border control, saying they are holding migrants in inhumane conditions.

Mr Trump insists the border is facing a crisis and has defended the actions of his border agents. His administration announced a new rule to take effect on 16 July, which denies asylum to anyone who crosses the southern border without having applied for protection in “at least one-third country” on their way to the US.

After their testimony, Mr Trump said conditions at the centre had had “great reviews”. He then posted his series of tweets about the women and Ms Omar, attacks he redoubled on Monday. 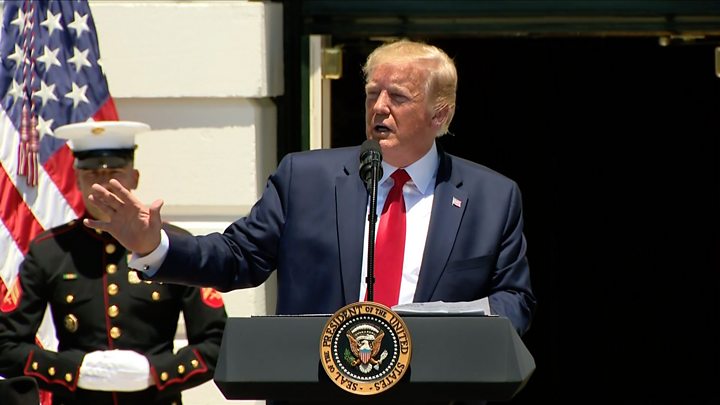 “If you are not happy, if you are complaining all the time, you can leave,” he told a heated news conference outside the White House.